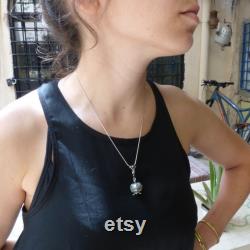 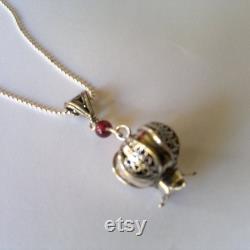 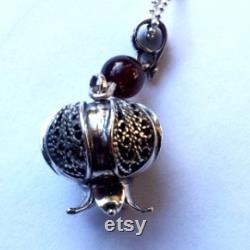 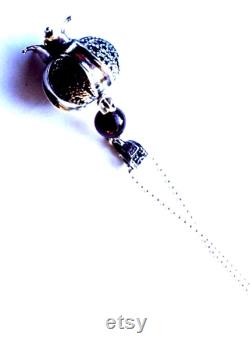 Sterling silver necklace, delicate gift for woman, christmas gift necklace. Adorable lady's silver necklace 925 - filigree pendant silver pomegranate necklace. Set with a garnet gemstone about 17.7 inches long - 45 cm. Pendant size about 1.4 cm - 0.55 inches. Yemenite designed sterling silver necklace with a garnet. Be amazed at the magnificence of this unique piece of jewellery art. A unique pendant with traditional yemenite motifs and garnet. This is a piece you will love.

About the pomegranate as a symbol. Exodus 28:33;34 directed that images of pomegranates be woven onto the hem of the me'il ("robe of the ephod"), a robe worn by the hebrew high priest. Kings 7:13;22 describes pomegranates depicted on the capitals of the two pillars (jachin and boaz) which stood in front of the temple king solomon built in jerusalem. It is said that solomon designed his coronet based on the pomegranate's "crown" (calyx).

Jewish tradition teaches that the pomegranate is a symbol for righteousness, because it is said to have 613 seeds which corresponds with the 613 mitzvot or commandments of the torah. For this reason and others, many jews eat pomegranates on rosh hashanah. However, the actual number of seeds varies with individual fruits. It is also a symbol of fruitfulness.

The pomegranate is one of the few images which appear on ancient coins of judea as a holy symbol, and today many torah scrolls are stored while not in use with a pair of decorative hollow silver "pomegranates" (rimmonim) placed over the two upper scroll handles. Some jewish scholars believe that it was the pomegranate that was the forbidden fruit of the garden of eden.

Pomegranate is one of the seven species (hebrew: rimon - shiv'at ha-minim), the types of fruits and grains enumerated in the hebrew bible (deuteronomy 8:8) as being special products of the land of israel. About the filigree handwork in silver.

Filigree (formerly written filigrann or filigrane) is a jewel work of a delicate kind made with twisted threads usually of gold and silver or stitching of the same curvy motif. It oftens suggests lace, and is most popular in french fashion decoration from 1660 to the present.

Filigree involves threads being soldered together to form an object and ajoure involves holes being punched, drilled, or cut through an existing piece of metal. The word, which is usually derived from the latin filum, thread, and granum, grain, is not found in ducange, and is indeed of modern origin. Skeat it is derived from the spanish filigrana, from "filar", to spin, and grano, the grain or principal fibre of the material. Though filigree has become a special branch of jewel work in modern times, it was anciently part of the ordinary work of the jeweler. This item is made of garnet and silver.

The style is mediterranean and traditional.