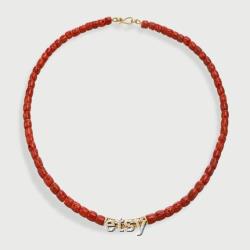 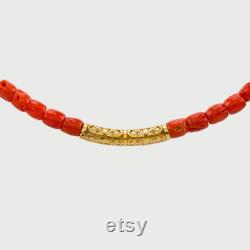 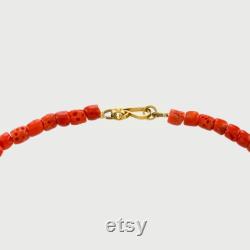 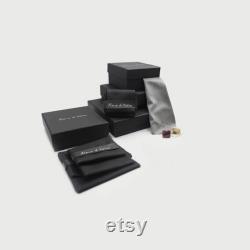 This necklace is strung with genuine barrel shaped coral beads in deep orange tones that blend with rich gold color of the central piece. In contrast with the smooth shape corals, this fleur-de-lis adornment of 18k yellow gold, in detailed pattern is designed to generate a sophisticated and stylish look.

The corals are selected for their graduated size and warm color, fastening with our classic hook-and-eye clasp of 18k gold to gently rest against collarbones. Coral: barrel shaped coral beads. Precious coral is a gemstone quality variety of natural coral, closely related to reef-building'stony' coral. The use of coral as gemstone goes back to 25000 years ago. Coral jewelry has been found in ancient egyptian tombs and prehistoric european burial sites.

It has been used as a currency for trade between ancient phoenicians and romans. The ancient greeks used coral against poison, witchcraft, and protection from enemies during war, as it was considered a gift from gods with special powers. They believed that coral originated when drops of dried blood of medusa's severed head was carried into the ocean by sea nymphs and planted there.

The pueblo indians considered coral to be one of the four elemental stones. The gauls often used coral gems as ornamentation for their helmets and weapons in the belief that it was a protective stone.

The romans hung branches of coral around the necks of their children to protect them from danger. Until quite recently, the medicinal qualities of coral were believed to be numerous. The french created rosaries of coral to hang around their necks in the belief that this would stop bleeding. In the late middle ages, coral was highly valued as medicine for a variety of ills. In the early 20th century, the people of italy used coral for protection from the'evil eye'. Red coral aligns to the root or base chakra and pink coral can be beneficial for the heart chakra. All our jewelry is handcrafted in our studio in athens, with high quality materials, for over 35 years. Thank you for following us on instagram and facebook. This item is made of coral and stone, gold.